Balancing Your Brain’s Dopamine Levels to Feel, Look and Perform at Your Best By John Maguire, Founder and Director of the Kinesiology Institute Dopamine is one of the

By John Maguire, Founder and Director of the Kinesiology Institute 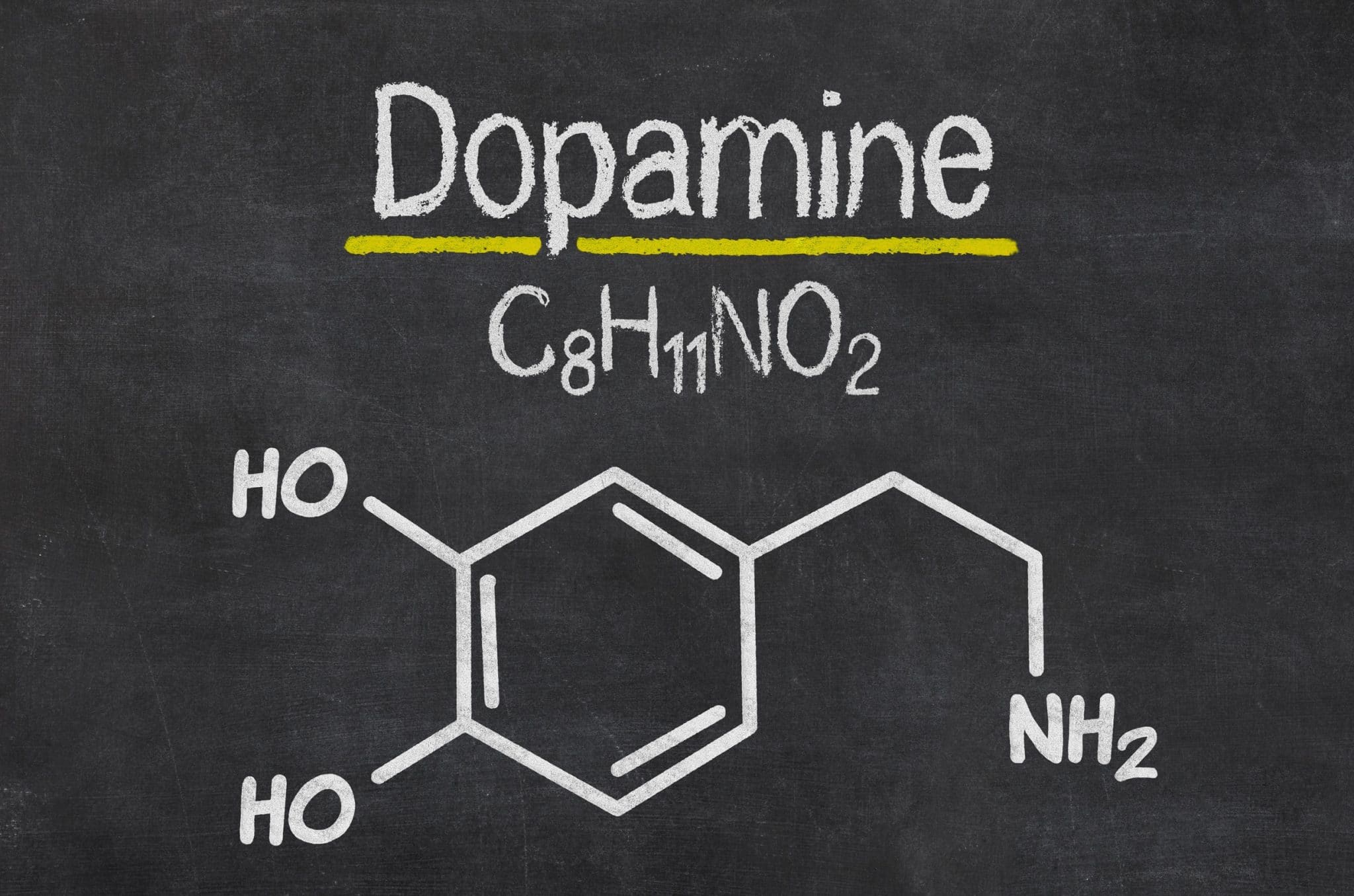 Dopamine is one of the four primary chemical messengers in the brain known as neurotransmitters , the others being acetylcholine, GABA (gamma amino-butyric acid) and serotonin.  To achieve optimal mental and physical health, these four neurotransmitters need to be in proper balance.  When one of these neurotransmitters is either deficient or in excess, it can result in various symptoms and conditions of illness.

This article will focus on how dopamine affects you, what happens when your levels are low and how you can raise these levels naturally to help achieve physical and emotional well-being.  It is not the intention of this article to have you try to self-diagnose or treat any condition or disease.  If you have any serious condition or illness, seek appropriate medical treatment from a qualified health professional. For more information on this and the other four primary neurotransmitters read the book, “The Edge Effect” by Eric Braverman, MD.

Dopamine and acetylcholine are excitatory and switch the brain on.  These levels are higher during the day to keep you alert.  GABA and serotonin are sedative and slow the brain down.  You want these to be higher at night to help you relax and sleep.  In ample supply dopamine gives you physical and mental energy, motivation to get things done, a high sex drive, quick thinking, and an ability to fight off cravings.  If you lack some or all of these qualities, it is a likely sign that your dopamine levels are low.

Everyone has one dominant neurotransmitter.  This largely determines what your temperament and personality is.  Dopamine dominant people are driven to achieve things and are often successful at what they do.  They are self confident and can stay focused on the task at hand, knowing what they want and how to get it.  They do well under stress and thrive on competition.  Even if you do not have a dopamine dominant nature, when you do things to raise your dopamine levels, you will find that you get more things done and are more driven to succeed.

For all of us, dopamine works like a natural amphetamine and controls our energy, excitement for new things, and motivation.  It monitors and regulates our metabolism and relates to setting goals, long term planning, and voluntary movement, intelligence and abstract thought. Its by-product is adrenaline.  A long term drop in dopamine can bring on addictive disorders, obesity, severe fatigue and Parkinson’s disease.

Much of our behavior is directed towards raising our dopamine levels.  Men are particularly driven to up their dopamine, although women certainly enjoy a boost in levels, too.  Going to sporting events, attending a rock concert and watching action movies can provide a dopamine rush.  Doing high adrenalin activities, such as riding roller coasters, white water rafting and skydiving can certainly get your dopamine soaring. When a sports team wins a championship, the entire city’s mood is uplifted.  We can thank dopamine for that.  And sports heroes, as well as rock stars get paid big bucks to give us this biochemical boost.

In romance it is actually a dopamine surge we are feeling.  We accurately say we feel “chemistry” for someone.  These levels especially rise during sex. They elevate even more when sexual activity occurs for the first time between new partners (lust and sparks). Think of when you fell in love with someone and how high and on top of the world you felt.

We want to keep the flame alive, but as we become used to our partner, it’s hard to sustain those high dopamine levels.  If dopamine levels come tumbling down, we lose that loving feeling and “the honeymoon is over.”  People have a natural biological tendency to resort to behavior to increase these levels.  You can understand “cheating” as a consequence of biological drives, which as one researcher put it “cause dopamine spikes seen only in heroin addicts when shooting up.”

So if you want to keep romantic love alive – do novel things together, because any kind of novelty drives up dopamine in the brain. Explore healthy ways to keep your dopamine levels balanced, including the nutritional suggestions below. Do things together that create excitement, passion and pleasant surprises.

When dopamine levels are low, many physical symptoms can result.  Anemia and fatigue, decreased physical strength and activity, slow metabolism and thyroid disorders, excessive sleep and narcolepsy can all be associated with dopamine deficiencies.  Other signs include carbohydrate binges, sugar and junk food cravings, blood sugar instability, constipation or diarrhea, digestive problems, obesity, inability to gain or lose weight, and loss of appetite.

Diabetes, kidney problems, high blood pressure, bone density loss, joint pain, and Parkinson’s disease are also on the list. Low sex drive and difficulty achieving orgasm often relate to low dopamine levels.  Many alcoholics and drug addicts, along with people who got to have that cigarette are often dopamine deficient.  Raise the dopamine levels and the urges will often go away.

Emotional disorders related to dopamine deficiency are mood swings, being aggressive, getting easily angered, and inability to handle stress.  Also common with low dopamine can be fear of being observed, guilt or feelings of worthlessness or hopelessness, isolating oneself from others, and self-destructive thoughts. Depression can be a result of dopamine deficiency, although serotonin and GABA deficiencies can contribute to this as well. Another sign of low dopamine is procrastination.  Since deadlines increase dopamine, it’s no wonder why so many people finally get their taxes done right before they are due in April.

Memory and attention issues of dopamine deficiency include attention deficit disorder, hyperactivity, being easily distracted, forgetfulness, failure to listen and follow instructions, failure to finish tasks and impulsive behavior.  Who do you know that has many of these signs?

Natural Ways to Raise Your Dopamine

So how can you raise your dopamine levels naturally? It boils down to L.E.T. – Living, Eating and Thinking. First let’s look at nutrition.

Tyrosine and phenylalanine are two amino acids that are precursors to dopamine. They both act as pain relievers and can help raise our energy and our ability to handle stress. Foods that are high in these are meat, chicken, duck, turkey, eggs, dark chocolate, granola, cottage cheese, ricotta cheese, low fat, low salt cheeses, yogurt, soy beans, walnuts and wheat germ.

Caffeine raises dopamine levels, but can lower other neurotransmitters. The reason why people stand in long lines every morning to get their caffeine fix at the local Starbucks, and why colas and products like Red Bull are so popular, is they boost dopamine levels.  Don’t think keeping yourself well caffeinated is necessarily your best strategy, because if you are serotonin deficient, caffeine could give you insomnia.  People with a GABA deficiency might become nervous and have palpitations after a cup of coffee. And if you are acetylcholine deficient, you can become jumpy and unable to think clearly.

Supplements that can help increase dopamine levels are best taken on a full stomach after breakfast or lunch.  These include tyrosine, phenylalanine, methionine, glutathione, rhodiola, B-6, B complex, phosphatidylserine and ginkgo biloba. Rhodiola is an herbal stress adaptogen.  It can enhance concentration and endurance, uplifting one’s mental state and supporting optimal immune, adrenal cardiovascular function even under conditions of severe stress.

Lifestyle factors include meditation and relaxation to recharge depleted dopamine levels from too much “go-go, push-push” living.  Alternate nostril breathing taught in yoga, along with yoga postures can also be helpful. Weight lifting and anaerobic exercise can boost dopamine levels and are best done in the morning when you want your dopamine levels high.

Setting goals that inspire you, establishing deadlines that motive you and listening to motivational speakers can pump up your dopamine levels. Spend time making short term and long term plans.  Also keep your environment organized and uncluttered.  Avoid cigarette smoke and quit if you do smoke, as cadmium in cigarettes reduces dopamine.

To direct your thoughts in ways that will raise your dopamine, focus on goals and dreams you want to achieve.  What are you passionate about in life?  Who are the people that inspire you? What activities, such as sports, dance, music or art, turn you on and leave you feeling great?  Spend time doing these activities and being with people who uplift you.  In the words of Henry David Thoreau, “Go confidently in the direction of your dreams.  Live the life that you have imagined.”

John Maguire is the founder and director of the Kinesiology Institute based in Los Angeles, California.  He is a senior faculty member of the Anthony Robbins Life Mastery University.